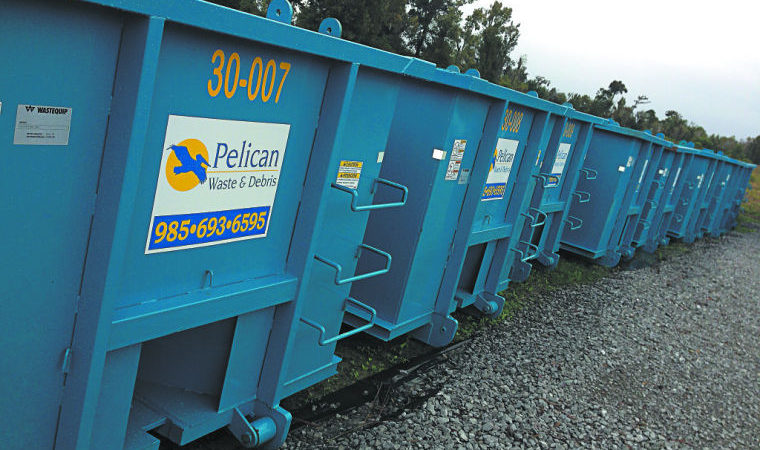 Now the Callaises are back in the trash business, forming Pelican Waste and Debris in September, and are taking aim at the company they sold to.

Leading the newly formed Pelican Waste and Debris is Roddie Matherne, the manager who grew SWDI from a $14 million a year business when he took the post in 2003 to the $60 million behemoth that was sold to Progressive.

“We just saw a need for it,” said Matherne, who was the regional marketing representative for Progressive before taking up the new company. “I think a lack of customer service was a big factor.”

Representatives of Toronto-based Progressive, the third-largest trash company in North America, couldn’t be reached for comment.

Former SWDI customers have been eager thus far to switch back to the local provider. Matherne said Pelican has distributed about 100 dumpsters in fewer than two months since the business opened.

Doug Davis, manager at Nancy’s Seafood Shack in Houma, said he could not wait to switch back to a local provider.

“Being a local company ourselves, we would much rather do business with local companies,” Davis said.

Before switching to Pelican, Davis said Nancy’s had been using Progressive to pick up its trash. The stench of rotten seafood began to linger outside the restaurant when daily pickups became irregular.

“I had actually been trying to call Roddie numerous times,” Davis said. “The smell had gotten pretty bad, and I couldn’t get anyone on the phone over there.”

It wasn’t until Davis looked up Pelican Waste and Debris on the Internet that he discovered where his former sales partner had gone.

“Found that it was local, and they promised the best service, then I found out it was Roddie, and it went from there,” Davis said.

Since then Nancy’s has had no problem getting its trash picked up on time. Pelican even replaces and cleans Nancy’s dumpsters on a regular basis.

“It was all of a sudden like falling off a cliff with the service as far as our pickup needs and stuff like that,” Davis said. “When (Roddie) was with SWDI, we had no issues. Since we’ve switched back, we haven’t had any issues.”

Matherne started his career with SWDI in 1983, just out of high school, picking up trash cans.

“I was just an unemployed kid,” Matherne said. “I wouldn’t have called it a dream job, but I made it work.”

Matherne got a phone call in September from Corey Callais asking if he wanted to help the family start a new waste company.

“I almost talked them out of it when they called,” Matherne said.

But then Callais upped the ante, offering the former manager a partnership in the new venture. It was an offer that Matherne, who said he’s always dreamed of running his own business, could not pass up.

The fledgling company is operating off of one of SWDI’s former lots on La. 3235 in Larose. Pelican purchased one front-loading truck and one tractor-trailer and is in the process of setting up a modular office building on the gravel lot, with total investment thus far at about $1 million.

While the company is only servicing commercial and business customers, it is Matherne’s former residential customers who have been making the most phone requests, and the company hopes to begin offering residential pickups in coming years, he said.

“I’m looking to bring back what SWDI had before. Hopefully in several years we will have $30 million in business,” Matherne said. “It’s driven by relationships. What we were founded on is genuine customer service, being there when people need you.”