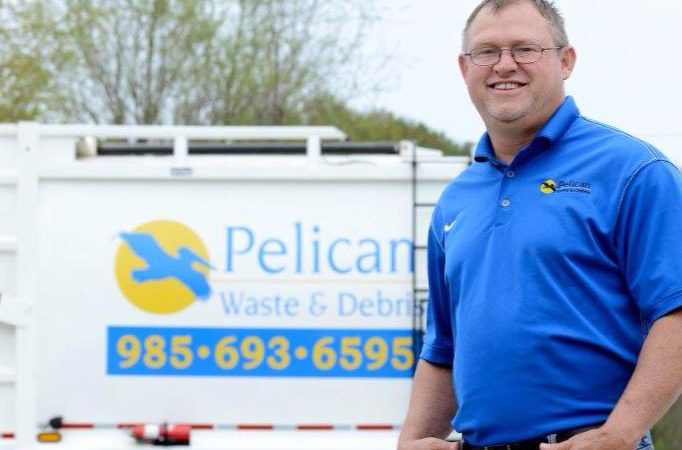 Local businessman Roddie Matherne believes that he has a dream team in place within the world of waste and debris pick up.

Within the structure of that team, Pelican Waste and Debris was born.

Combined with other co-owners Christian D. Lapeyre and Corey Callais, the trio recently created the local business, which specializes in industrial and commercial waste and debris pickup.

With decades of experience in the field, Matherne said that Pelican separates itself because of its ability to cater to its customers.

“We all have experience,” he said. “We all saw the problems with big, corporate companies. We decided that we’ll all get into business together because we knew the problems that people were having in other places, and we knew we could rectify some of those issues.”

The company opened its doors this month and is still within its first official month of service.

The reason for the idea was because of each person’s roots within the field.

Callais was the former headman at SWDI, a solid waste management company that serviced pickup in the Tri-parish area.

Through that gig, he also encountered Matherne, who said he worked with the company for more than two decades.

After both men got out of the industry, they combined with Lapeyre and decided to bring all of their knowledge and resources into one place: Pelican Waste and Debris.

“We’re here to provide great service,” Matherne said. “That’s something we’re going to take pride in. We’re going to provide great service for a reasonable price. We can set ourselves apart by being locally owned and operated and also a company that is willing to be fair and treat people with respect and give them a necessary service at a fair rate.”

Matherne said that as of right now, Pelican services Lafourche, Terrebonne and St. Mary parishes, offering dumpsters and pick up to businesses within the three-parish area.

“We’re in all three parishes,” he said. “We’re proud to serve each of the Tri-parishes. But additionally, we’d like to grow and expand our services and service people from other areas, as well.”

Growth is a word that Matherne says often when talking about Pelican Waste and Debris.

“That’s our hope,” he said. “It’s going to take some time to get there. That’s much farther down the road, of course. But it certainly would be our hope that we can get ourselves at that point someday here in the future.”

Probably the reason for the optimism is the way that the business has started. Matherne said that Pelican Waste and Debris has had a successful few weeks in business and have a bright future on tap.

He said that things have been positive.

“It’s going very well,” Matherne said. “We just started. We just got the trucks in a couple of weeks ago. So it’s taking us a little bit of time to fully get everything rolling. But we’ve been very pleased so far. I think that we’re very satisfied with how things are going.

“Certainly, we’re very hopeful and optimistic about where things will be headed here as we move ourselves toward the future.”

But through it all, Matherne said Pelican would never forget its principles and its reason for being in existence.

He said that staying a locally owned business that is personable to its customers is something that will never change.

“We’re going to stay who we are,” he said. “We’re going to look to continue to grow, but not change ourselves within that growth. We’ve all been in this business quite some time. We all know what is necessary to stand out and be successful.”

Article courtesy of The Time Houma
By Casey Gisclair